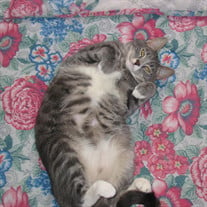 On an early fall day in 2002, an injured male tabby kitten was discovered along a hillside in Latrobe, Pennsylvania. He was rescued and brought home, much to the dismay of his rescuer's then-wife. He was named Dick by his rescuer, who would later go on to consider him his best friend. Dick quickly began living up to his name. A particularly ornery kitten, Dick delighted in all of the domestic shenanigans than most male kittens are known for, and then some. Dick quickly began earning many nicknames, "The Dryer Cat" being the most commonly used. This was due to Dick's excitement over a running clothes dryer, which would compel him to meow and follow his loving owner every time he went to the dryer to load or unload it. Throughout Dick's life, he managed to put a smile on the face of everyone he ever encountered. He was the most loving, sweetest cat that most people have ever met. He won the hearts of virtually everyone he came into contact with. Even people who otherwise didn't like cats. Dick thoroughly enjoyed peering out windows and watching the birds. Most of all though, he was a loyal, comforting soul to his owner. Dick spent his entire life in the care of his owner, and was by his side throughout many changes, both positive and negative, in his owner's life. Dick traveled more than most cats, spending the majority of the 2011-2012 winter in Vista, California. Dick spent most of his time in California on the balcony of his owner's apartment, viewing many different and exotic species of birds. Dick was extraordinarily agreeable with other cats as well. He was never aggressive or territorial when introduced to other cats. Instead, he was merely inquisitive and playful....A rare trait for male cats. Dick never scratched or struck people or other animals. A simple deep breath and a "huff" was his only display of discontent in an uncomfortable situation. Dick came into his owner's life with an injury to his right rear leg, which his owner was advised to not operate on. While Dick was always mobile and walked normally throughout his life, his leg healed in such a manner that instead of running across a room or up a flight of stairs, Dick hopped much like a rabbit would. This handicap did not deter Dick from jumping onto different household objects though, which he often did to the dismay of the women in his owner's life. One particularly memorable display of Dick's orneriness is centered around a "Chia Pet for cats" that his owner's former wife innocently thought would be a good idea to grow. At that time Dick was one of several household cats, and his owner's wife purchased and grew a Chia Pet designed for feline consumption. She assumed that once it had matured, she'd be able to leave it out so that the cats could "nibble" on it as some sort of snack. The morning after she left the matured Chia Pet on the kitchen table however, she and Dick's owner came downstairs to find the entire novelty devoured, and subsequently projected all over the mini blinds adjacent to the table. Dick's love of anything edible was well known throughout his entire life, and this particular incident will always be remembered with a smile and a chuckle by his owner. Dick will be remembered and missed by everyone in his life. There was something more to him than "just a cat". This consensus goes beyond just his owner's feelings. Dick is a very old soul. His understanding of human emotion was far more deep than that of his feline counterparts. He will never be forgotten, and is loved more than he could ever know. Rest in peace, little buddy. I'll see you again. I love you..... -Papa

On an early fall day in 2002, an injured male tabby kitten was discovered along a hillside in Latrobe, Pennsylvania. He was rescued and brought home, much to the dismay of his rescuer's then-wife. He was named Dick by his rescuer, who would... View Obituary & Service Information

The family of Dick Bush created this Life Tributes page to make it easy to share your memories.

A comforting word from you means a lot.

Send flowers to the Bush family.